A) VAN ALLEN AND THE ENIGMA OVER THE MISSION ON JUPITER BY PIONEER 10.

“We are now quoting some excerpts from  the interview to Van Allen by Duilio Pallottelli, published on L’EUROPEO, edition no. 51, released in December 1973.

On the night of Monday, December 3rd, Pioneer 10, the small spacecraft launched by the NASA in March 1972, due to explore Jupiter and then disappear in the cosmos, out of the solar system, has reached a crucial point in its mission: at a distance equal to 131.400Km from the huge planet it is about to get to it.

(…) Ever since scientists started to talk about a space trip to Jupiter, many years ago, Van Allen was the tireless promoter of dozens of initiatives of capital importance for the success of the enterprise; he put forth important technical tips to build the space vehicle.

(…) “It is all wrong”, James Van Allen mutters, examining the first data from Pioneer 10, registered by a computer, “All the stories on Jupiter, my explanations on the magnetic field included, are to be corrected. It is still too soon to  state exactly what we have seen or discovered up there, but it is clear that Jupiter is absolutely different from the idea we had of it. Different in all senses of the term. I had built the Jupiter’s model also drawing up the limits of the magnetic field as I supposed they were, and now I have in front of me a handful of data which completely subvert everything. On the other hand, I would not be surprised if in one week, I mean once all data will have been carefully studied,  everything would change again and the mystery would become even more obscure, instead than clearing itself. This is the drama: the risk, but also the allure of spatial explorations. For each answer you obtain, pop out a thousand more questions, which you had not considered at all until a moment before.

Professor Van Allen, let me interrupt you right at this point, before talking about Pioneer 10. I would like to ask you: what is Jupiter?

Jupiter? It’s something that sometimes drives you crazy! Just like the other night, when the Pioneer, which in that moment was only 6 million kilometers far from its goal (landing on Jupiter), all of a sudden seemed to spin out of control. We were entering the enormous magnetic field of the planet more and more, when abruptly, all devices started to signal the opposite. It was as if the vehicle had steered and was coming back. When they informed me, I was at the hotel and thought they were kidding, I mean, I thought it was a joke. Instead it was the truth. All signals telling us we were penetrating the magnetic field had disappeared (…) as if the spacecraft had returned a few billion kilometers back.

How can you explain such a phenomenon? It is clear that the spacecraft was not coming back.

It wasn’t, obviously: the Pioneer was regularly on its track. It was Jupiter’s magnetic field that was proving to be completely different from what we had imagined. I thought that, instead than being a circular band, like the one existing around the Earth, the magnetic area around Jupiter was irregular and that some of its parts reached a considerable distance from the planet. In other words, a magnetic band with highs and lows. Moreover it wasn’t clear if those magnetic strings were fixed or not. Something made us think they moved due to the extremely high rotation speed of the planet. It was also possible that some other unknown phenomenon characterizing Jupiter’s atmosphere made them quiver. There are at least a thousand explanations to this phenomenon. All of them are apparently valid, but I believe that in the end we should have the courage to admit that we know about this planet less than before. In other words, if the magnetic field of Jupiter was a circle, it would move like a “hula-hoop” around a girl’s hips.

You were saying that it could be a phenomenon deriving from a vast variety of reasons. Could you give me another explanation?

I was saying that the first certain data item, I mean the first discovery we have made, is that Jupiter’s magnetic field, besides being completely different from the Earth’s, is also very far from the idea we had of it (…).

All in all, the idea of the magnetic strings, irregularly propagating around the planet could still be valid even if some of my colleagues disagree. (…). As to an overall evaluation of the mission, I will just tell you that we all are strongly committed to rethink all the theories and ideas which were valid for us until the day before yesterday. As I said before: “the mystery gets more obscure and the questions with no answer proliferate. (…)” 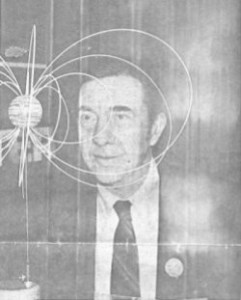 Attached to the interview, the Journal also publishes one of Van Allen’s photos -the one you see above – in a visibly thoughtful expression in front of Jupiter’s magnetic field model, which he had built relying upon the traditional theory which – as we have read in his interview – was proved to be completely wrong by the data collected by Pioneer 10.

It is just one of the innumerable examples one could give of such phenomena which cannot be explained from a traditional perspective. The journalist’s last question, forcing Van Allen to offer a plausible explanation of the data collected by Pioneer 10, proved to be a failure from the start, since the scientist had already shown from the beginning his profound bewilderment about those data.

We will take Van Allen out of his discomfort simply multiplying by four ( a sample number) our logo (pict.1), since whatever body – and this is obviously valid for celestial bodies too – is not the scenario of only one propagation, but of endless gravitational propagations: that is why we call it magnetic-gravitational body. 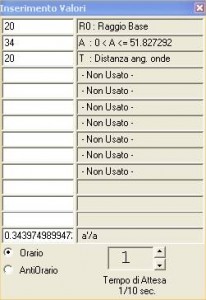 ASSI CARTESIANI. The value of a’/a expressed in the low ofthe picture can be obtained by clicking by A on the second line. Click on PLAY.

Prodigiously, all problems harassing  Val Allen can be solved in an instant. Let’s imagine we are travelling on the Pioneer along one of the axes in the picture, from a side of the picture towards the eye of this gravitational storm, that is towards the center of  Jupiter and its magnetic field. It is clear that the space-probe, crossing one of the spiral bands of the field, will detect the presence of an extremely strong magnetism, but then, continuing on its track towards Jupiter, it will go out of the band in a relative magnetic vacuum causing  a natural bewilderment in Van Allen and his colleagues.

There is no point in further highlighting the fact that even all the rest becomes clear: the “strings” of Van Allen’s field – the so called spiral-shaped bands – and their hula-hop -like quivering movement, being they immersed in a naturally undulatory, rotating and transversal field according to our Physics.

B) THE TALE OF AN OGRE CALLED “BLACK HOLE”.

We have already demonstrated the groundlessness of such ideas like “gravitational collapse” or “neutron star”, linked to the supposed nature of pulsars. These ideas, as we have seen, have led scientists to believe in the existence of black holes.

We have also said that these holes, gravitationally swallowing even their own light , would give us just indirect signs of their existence. Let’s read the tale about the formation of one of these signs.

We have observed such stars revolving around an invisible fellow star whose orbital revolution times are so brief to lead our logics to exclude they form a binary system.

And here is how the invisible star, whose presence might have been signaled by proper X-ray emissions, assumes the form of a cosmic ogre swallowing the unfortunate satellite star revolving around him at an incredibly high orbital speed ( M.J.Rees, LE SCIENZE no.269, January 1991, search for stars “in a narrow orbit whose speed is higher than 10000km/sec!”). We talk about “proper” X-ray emissions, because this kind of emissions are very frequent in the universe, but here they become just another of the supposed indirect signs proving the existence of black holes, especially when associated with other inexplicable anomalies.

The logo, instead, tells us that the “whirlwind” of the magnetic field, firmly revolving around a single normal star and characterized by a magnetic-string field ( like Jupiter’s), is just “fanning” us with its spiral branches. The supposed revolution time of a star around an invisible second star is nothing more than the time interval between one of the branches crossing our visual field and the passage of the other one.

C) MADNESS AMONG THE STARS…

The previous solution extends, beyond the ocean of stories about black holes, in general to all other stories relating to any supposed  binary orbitation having hyper-brief revolution times. We can get to read, always on LE SCIENZE (no. 32, April 1971: The nature of pulsars, by J.P. Ostriker) that the minimum periods (for a couple of high density stars rotating (almost brushing against one another) on a circular orbit is equal to 1,7 seconds!” As we can see, madness characterizes , if not the cosmologists making such hypotheses, the world of stars.

The explanation obtained through our logo also applies to the types of stellar variability having both brief or hyper-brief periods (cepheids): current cosmology sees luminous variability as an endogen factor proper of all objects under observation: inflating and deflating stars! – while it just complies with the structure of the spiral-branches stellar field, rotating with the star. In the EST Mondadori Enciclopedia, to the entry “ Variable stars” corresponds a definition according to which, on the basis of Shapley and Eddington’s theory, cepheids undergo contractions and subsequent expansions  at regular intervals. During the expansion phase, the star’s inner pressure and temperature diminish, as a result, it becomes redder and weaker.

After reaching the maximum diameter the process reverses, temperature grows and the star turns  bluer and brighter. Just think that the CY Aquarii star has a period of just 89 minutes then try to establish if madness is more common among cosmologists… or among the stars.

Permanent link to this article: http://renatopalmieri.com/?page_id=969