§ 1. We present three new figures, of  which we will  give successively constructive instructions and physical  illustration as we did for the first two.From them we will show that a precise mathematical law, contained in the cosmological equation, regulates the undulatory gravitational composition, for which the photonic waves give rise – for future space-geometric connections and progressive accumulation of gravitational strength – to the universal  undulatory gravitation.

In figg. 3, 4 and 5, the red circle, which was earlier in the photonic  horizon, assumes the function of equator of a body of spherical shape,  in which are innumerable propagations with different  relation  a’/a. The phenomenon of pulsationis present in the drawing  of propagations.

§ 2. The figure 3 shows a self-similar reproduction  (as in the photographic process) of the photonic propagation, which characterizes complex bodies with strong central condensation. Here the relation a’/a is close to 0, since the absolute value of a’ = 0 belongs only to the primitive propagation (or photonic). Among the “composed” propagations, we will call this one fundamental  propagation for its resemblance to the  photonic one (the first three waves correspond to those of Figure 2). It is the basis, as we already said and as we shall see later, of natural forms, distinguished by the golden relation.

§ 3. The Figure 4 presents in  the same body a propagation with  a report a’/a = 0.3, of example assignable to the matter distributed in a non-highly centralized way compared to the periphery. The spiral band resulting from undulatory densification  recalls those of the magnetic field of Jupiter, which is discussed chap.1.10.

§ 4. The Figure 5 draws, always of that body, a propagation with report  a’/a = 1 just of  the  matter symmetrically distributed in all directions around the center of the body. The resulting “concentric propagation” finds one of its natural examples in Saturn’s rings: the pulsation shows the gravitational thinning that causes the “divisions” among  the rings outside of the pulsed waves. The current astrophysics does not give any explanation. With the phenomenon of translation we encounter the same gravitational structure in the rings of tree trunks.

§ 5. We provide here the constructive data of the figures in the text, referring to the initials of the INPUT, without displaying the window INSERIMENTO VALORI (Entering values). So now, for figg. 3, 4 and 5:

We maintain an  implemented ANTIORARIO (counterclockwise)” sense in the window, lower left (propagation seen from north) until we will  decide otherwise. We neglect for now the last numeric data. 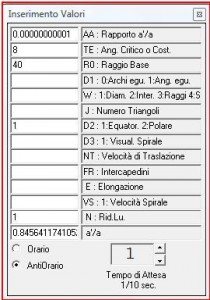 Fig. 3 (PROPAGAZIONE, blu): Impostare i dati come da tabella;  reset all the others.  Click AVANTI until the third wave after the pulsation. Then STOP,  to repeat operations with the next figure. 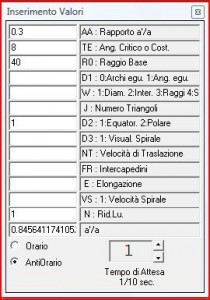 Fig. 4 (PROPAGAZIONE, verde): AA = 0.3; others as fig.3.  Click PLAY; stop will be automatic, with the figure in full screen. It shows three pulsations. 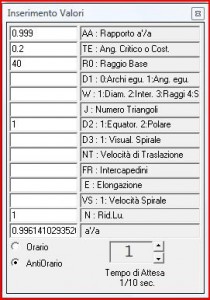 § 6. We will show shortly the mechanism by which the cosmological equation makes spherically the photonic waves in larger  and gravitationally more intense waves until the ones conveying galaxies and galaxy clusters.

Permanent link to this article: http://renatopalmieri.com/?page_id=1011