(CORRECTION OF THE UNIVERSAL GRAVITATION FORMULA BY NEWTON).

§ 1. In this chapter we will explain the precise meaning of the values “a” and “ a’ ” (gravitational intensity), from which our universal equation derives.

This way we will try to bring contemporary physicists, vainly engaged into “the great unification of forces”, out of their trouble, especially rising whenever they struggle to assert that the gravitational force has an intensity 1040 lower than the atomic-nuclear forces, this would make it difficult for it and these other forces to be unified. From this difficulty emerged the need for a galactic-dimension accelerator able to test such a prodigy (see no. 376/ LE SCIENZE, dec 1999).

Since it is impossible to measure subatomic gravitation with the help of all available instruments, contemporary physicists think they are able to measure it through the Newtonian formula, in which the bare masses of bodies interact and, due to the gravitational force existing among the particles, give as a result such infinitesimal values as their masses.

§ 2. In his Principia, Newton actually copes with the problem in a purely geometrical way, on the wake of Kepler’s empirical laws, obviously ignoring all the things we have been shedding light on, that is: the physical laws relating to gravitational wave and its exponential increase, which is not in line with the undulatory concentration phenomenon. In this sense, two conditions of matter act as exponential factors in the gravitational field: density and polarization. The higher the density and the more concordant the polarization is, the more the waves will tend to spherically merge, progressively empowering the global gravitational effect. Since these two conditions belong much more to the atomic-nuclear domain instead than to the macrocosmic one, this means that there is no point in using, to calculate gravitation relatively to that field, a formula which does not belong to that same domain. Such a formula is approximately valid for the macrocosm, just because here such conditions are much less perceivable and influential than in the microcosm.

§ 3. We are therefore introducing a unified pattern-formula, with numerical examples aimed at showing the way to an exact and dynamic evaluation of natural phenomena at every level. It must be now clear to our readers that the cosmological equation determines the morphology of all universal structures. It does not consider the attractive force among bodies, but only the ratio between their respective gravitational intensities, drawing up the subsequent undulatory geometry. So it completely does not take into account the absolute values of a and a’, but only, as we said, the gravitational ratio a’/a between the minor source and the reference source, with this ratio changing from 0 to 1.

§ 4. Let’s start from the Newtonian formula of gravitation, successively complementing it with the parameters it lacks: density (d) and polarization (p).

G is the so called “gravitational constant”, which, according to Cavendish’s calculations, is equal to the approximate value of 6,67. We have highlighted the excessive approximation of it in the article: “Gravity and the other “forces””, reported in section 4: a reference article centered on the debate over gravitation.

We are now re-writing that formula complemented with our values of gravitational intensity a and a’ (rather than the masses m and m’ ) to which we have added our supplemental parameters d and p (referred to m) and d’ and p’  (referred to m’ ).

Replacing G with K (conventional letters), G loses its universal component which in itself could not be maintained both for its renown approximation and its partial validity exclusively regarding the macrocosm. K is instead an excellent substitute: a proportionality coefficient varying according to the type of phenomenon and substance.

a is the mass – ancient quality of matter, denoting the number of particles making up a given body – multiplied by two exponential factors: one is related to density, (with its exponent xvarying with density); the other is related to polarization (with yvarying with polarization). The same is valid for a’.

§ 5. It is now extraordinary evident that, if in the macrocosm both on-average-low density and on-average-incoherent polarization are neglected, we will reduce to zero the exponents xand yof their respective factors.

We will then go back from (2) to (1), that is to the Newtonian formula. The error, in an experiment conducted with an improper method like Cavendish’s, marked by a hopeless approximation, is due to having ignored such parameters which, although not being remarkable in the macrocosm, are by all means relevant. In reality, x and y are not null, but greater than zero, even if by very little.

On the other hand, in the atomic-nuclear order, we have seen that, for example, a proton’s density is more than 3*1015 higher than the water’s and its polarization can be deemed absolute. Therefore it is correct assuming, through a range of examples, that for its mass x and y are equal to 10. Consequently, in the interaction between two protons in the nucleus, the product aa’ will be equal to 1040mm’. The difference between the acknowledged nuclear force and Newtonian gravitation of bare masses is then perfectly justified.

The force measured in the interaction between two bodies is always attractive, the only one to be real from the very start of a phenomenon, regardless of the triple outcome of collision, orbitation or escape.

§ 6. Our formula, anyway, will clarify innumerable other specific situations. Always resorting to a range of examples, as to the “neutron’s gravity”, we will give to its mass a value which is greater than x, being its density of the same type of the proton’s, and another value which is lower than y due to the incoherence of its polarization (from which the neutrality of such particle derives): we will explain the different real behaviors of a neutron in atom’s phenomena as follows. The same we will do as to the neutrino with respect to the photon, in another chapter.

Seemingly, in the macrocosm, analyzing the interaction between a magnetic stirrer and a neutral bar we will be far from considering a force other than gravitation, since the magnetic field is no more than a high-polarized gravitational field. We will just have to give both masses an almost-equal-to-zero  x value (like for the density of normal matter), but a high y value.

§ 7. Anyone can see that, according to this analysis, the newtonian formula of gravitation, the law of Coulomb and the conventional law regarding the interaction between magnetic poles, already similar in their formal aspects, find a perfect common thread in a single universal force: gravitation.

Such phenomena like “liquid electricity”, “cold fusion”, breach of the so called “equivalence principle” (also discussed in this web-site), although being part of our physical-mathematical classification, keep being uncorrelated and nonsensical according to the current scientific perspective, blindly making its way through endless dead ends.

We will call the equation above: “Ortodynamic Equation”, as a correction to Newton’s law. Let’s now unite in a single rendering both the Cosmological and Ortodynamic equations, reformulated according to a synthetic pattern and linked by the value of a and a’. We can undoubtedly state, as a conclusion, that the result includes the whole Universe in its structures and dynamics : 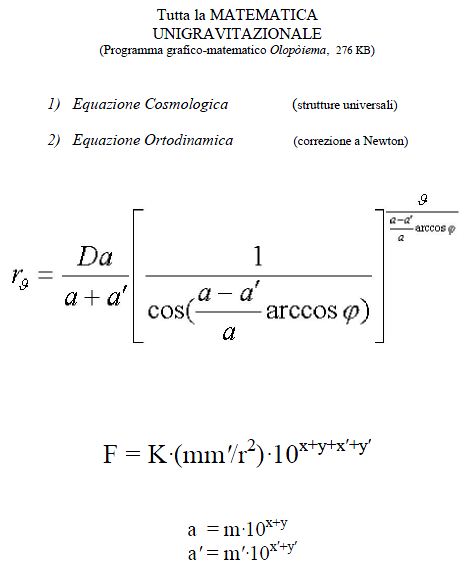 Permanent link to this article: http://renatopalmieri.com/?page_id=1428