§ 1. Now we will reveal the secret of the structure of an ordinary magnetic field, the one shown to  students – still unaware of the theoretical inconsistency of physics of their study books – with  the usual experiment with iron filings which is gathered around a small magnetized bar. We redraw in fig.6 the  fundamental propagation of Fig.3 (last chapter.), excluding the phenomenon of pulsation  and entering the circles of intersection among successive waves. 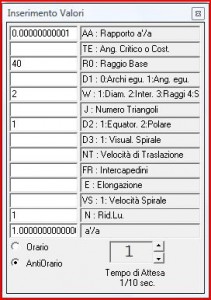 Constructive  data (PROPAGAZIONE, Nero):
1.  AA = 0.00000000001, R0 = 40, W = 2, D2 = 1, reset the others.
2. Click AVANTI 11 times, 10 diameters of the circles of intersection will be traced with waves, which, in projection on the equatorial plane of propagation (plane of the screen), are  reduced – as already said – to the segments of their diameters (be careful not to confuse them with the equatorial circumference of the spherical waves, visible in the drawing).

§ 2. In  the same body within the red equator, we draw another fundamental  propagation, elongated of 180° related to  the previous  one and added to it.

To construct Figure 7, click STOP to fig.6 and  activate  the gray copy PROPAGAZIONE without deimplementing the black one, which would otherwise disappear from the screen. Change only E with respect to fig.6, assigning E = 180. Then click AVANTI 11 times, as in fig.6, then STOP, and you’ll get the fig.7.

§ 3. A reflection on fig.7 leads to amazing results, which demonstrate that the current physics does not know the true structure of a common magnetic field;  it takes care to explain it to the students with the experience of the magnet and iron filings. Only that would be enough to prove what limitations, including technological, put this ignorance, not only to the development of knowledge in general – which in itself is already very serious – but at the same progress of tools and human machines.

Consider, then, as follows. Obviously, the design has been arrested at some time in the process of the two propagations, at a suitable place to illustrate our discussion. Obviously, again, a complex body has not only two propagations, as shown, but an untold number of them. Let us complicate in this way,  ideally, the design of fig.7 and let us ask how it would occur, if we passed from his Equatorial perspective – as we see on the plane of the  screen – to any other of its polar sections: cutting it, ie, with a perpendicular plane to the screen’s one  in the center of the body, or  in the center of the red equator.

There will be no one, given the healthy eye of the mind, which does not recognize right away, by rotating the plane of the polar projection perpendicularly to the screen, a variety of circles tangent to an axis: that is, those ones that on the plane of the screen appear as segments of its diameters, will be completely identical – apparently – to the usual lines of force of a conventional magnetic field. We say “apparently” because we will soon see the huge physical difference between the two optics of the same phenomenon.

The fig.8 gives us an example of such a perspective, if the plane of the screen becomes one of the  polar plans, on which the equatorial plane of fig.7 is projected as an X axis  and the Y axis serves as polar axis of the two propagations. The red circle is no longer the equator of the body, but one of its meridians.

§ 4. The construction process of fig.8 with OLOPOIEMA  is in this case  particularly interesting: 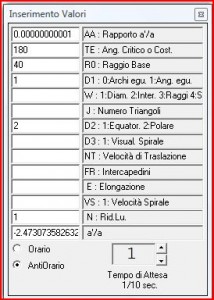 In the FINESTRE menu,  implement ASSI CARTESIANI, with MUOVE ASSI, place XY at the center of the screen.
PROPAGAZIONE, Nero.

§ 5. To further highlight the meaning of the process, we repeat the operations of the preceding paragraph, using two more times the sub-program PROPAGAZIONE in green and blue in addition to the design of Fig.8, in reference to a core of the same red body, with a smaller radius (for example, with R0 = 20 instead of 40). We will obtain the fig.9.

§6. But let’s get the awful joke that the iron filings played to the mindless empiricism of contemporary physics.
As it is now clear, the symmetric appearance of circular lines of force around the magnetic polar axis (the one of  a magnet or a star) led traditional physicists to believe that the magnetic field had toroidal shape: namely the one  of an infinite series of surfaces, each one internal to a greater one, each one having the form of a torus (surface generated by  the rotation of a circle around a straight line,  coplanar to it and external).

This results in three physically absurd consequences, which we compare now with the true characteristics of our magnetic field:

1) The “lines of force” of the usual magnetic field are any circles of those toroidal surfaces and do not have any geometric-functional classification of physical nature. Ours, however, are circles of intersection among successive waves, and therefore they are precise geometric loci of a sum of gravitational intensity, which are  precisely some  real lines of force.

2) The toroidal surfaces of the traditional field do not have among themselves, as well as the lines of force, any functional relationship, being geometrically separated from each other, as many they can be theoretically considered. Our wave surfaces are, however, linked by their mutual intersectoral circumferences, that make them a continuous and interrelated fabric of a strictly physical character.

3) The typical whirling  of  bodies and corpuscles in a spirals centripetal sense in a gravitational-magnetic field – for example, “curls” of particles in bubble chambers or paths of meteorites falling or galactic spirals – has not any  natural explanation in a toroidal field, functionally insignificant, as it finds an evident road path,  along arcs and intersections of waves, in our field model.

Permanent link to this article: http://renatopalmieri.com/?page_id=1020