Return to The Unigravitational System

Section 6. Description of the infinitesimal threshold of the physical universe.

Description of the infinitesimal threshold of the physical universe.

Introduction: A person is their mind and not their tools.

Modern physics was born from the incapacity of its guardian gods to establish logically correct relations between the usual and the apparently anomalous phenomena, by simply applying to the ones and the others a viewpoint and a logic as a whole.

Between the Andromeda galaxy and a quasar billions of light years far away, whom of those venerable monsters of the thought will be able to understand that it is a matter of different observations that reach us and not endogenous to those celestial bodies and therefore that Andromeda, if it was placed in the position of the quasar, would appear itself as a quasar?

Bad luck is such that those great minds have delivered interpretations of what they could not understand the craziest ones one might imagine and those have become a mystic object to adore like a fetish, both for their creators, both for the fanatical credulity of the profanes.

If this was not the result of the congenital stolidity of contemporary theoretical physics, one would be tempted to guess the existence of a diabolic plan, the slyest possible, intended to destroy the homo sapiens ability to think.

This section of our book represents the restoration of the rights of knowledge, that from the known inquires the unknown and based on the laws of the world of experience, both of senses and instrumental, logically reaches the extreme threshold of the physical universe. This cannot be other than itself, because the journey taken to get to it deductively implies that without that particle limit, as designed, the entire universe could not be.

The analysis of elementary particle, that is the absolute atom, that we are going to do here, then, is the culmination of a strictly logical path that descends from the existing nature toward its ultimate foundation. It is inconceivable how the physicists of today have not, for example, posed a problem essential for any further discussion: that of the wave sources emissive frequency, which cannot be attributable to the intimate functioning an absolutely elementary source.

The mankind’s journey into the third millennium is definitely predetermined by a waiver or recognition: the recognition of its autonomy from the “things” or the its abandoning.

Permanent link to this article: http://renatopalmieri.com/?page_id=1230 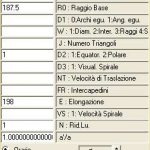 Chapter 6.1  The elementary particle: the photon (absolute atom, graviton: “The Universe is light”).  GEOMETRIC STRUCTURE – KINETIC PROPERTIES  – THE UNDULATORY FUNCTION       § 1. What we are going to describe is the geometric outline of an infinitesimal mechanism, producing elementary gravitational waves, of which we have studied in the previous section 3 the …