In D’Arcy W. Thompson’s work, “Growth and Shape” (Boringhieri 1969) we can read as follows:

“An outstanding example of the logarithmic spiral is described by the movement of certain insects towards a candle. Given their compound eye-structure, these insects do not have a direct, frontal vision, but an angular vision. Moreover, since they constantly correct their direction according to this constant angle, to get to their destination, they follow a spiral path” (Page 198)

Such an explanation is the fruit of a merely external and empirical approach by contemporary Science towards natural phenomena. The same concept could be rendered in an easier way: “insects go towards the candle following a spiral path because they are cross-eyed”.

We would just need to think about it for a longer while to understand that the particular optical structure of the insect and its way to move across the space has been determined by the very structure of the electromagnetic field. If we consider corpuscular-light rays (starting in their source point) and the constant angle underneath which a logarithmic spiral cuts them, we will clearly obtain the main geometrical features of an electromagnetic field: longitudinality (the rays follow the same direction of the corpuscles) and transversality (the spiral is a wave-guide).

Unfortunately though, Schrödinger in his extract “What is matter?” from his book “Physics and the atom” (Zanichelli, 1969) hopelessly recognizes that current Physics:

“… does not offer an absolute and satisfactory definition of the longitudinal and transversal concepts. Actually neither does it for the concepts of wave front and normal”.

In superior organisms (like the automatic-orientation organic systems), in which the effects of a better and more direct form of evolution are clearly visible, with the prevalence of the longitudinal factor over the transversal one (this means that the eye structure is not compound), the same directional trends of the insect persist.

It is demonstrated that a man, who gets lost in a desert, tends to follow a spiral path. In a blinds-man’s bluff competition carried out in a famous Neapolitan square, the blindfold competitors were not able to follow a straight line; in fact they behaved exactly as the person lost in the middle of a desert of the previous example.

From the cosmologic equation in our logo can be drawn the perfect graphic representation of the insect compound eye structure. We just need to add the rays (pict. 1), meant as the wave normals that Schrödinger, in his article, but also, all nowadays Physicist, and are not able to combine with the profusely demonstrated  transversality on an electromagnetic field.The spiral band obtained through the overlapping of wave fronts (which then add to their efficient intensities) forms a magnetic path which the insect prefers choosing to get to the candle: this path is visibly transversal with respect to corpuscular-light rays, which represent the longitudinal component of the field. 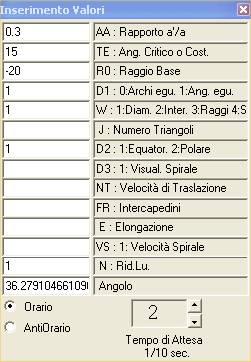 Before describing the field drown on the logo in mathematical, geometrical and functional terms, we have to consider some important points. The circumferences traced on the diagram are in reality spherical wave-sections cut in two halves by a geometrical equatorial plane. Their propagation is centrifugal and rotating around an eccentric center-of-mass, positioned exactly in the axes cross-point. The external matter (the insect, in our case) flows towards that center-of-mass with a centripetal and spiral movement along a band like the one which in the logo was simply drawn overlapping the wave fronts.

Whatever particle – like, for example, an electron- is attracted, like the insect, towards a magnetic field. Also the stars are attracted in the gravitational field of a spiral galaxy (like the “Whirlpool” M51 galaxy) or the clouds in a low-atmospheric- pressure field or the calcareous molecules in the Nautilus shell.

There is only one physical and mathematical law governing the Universe and all its phenomena. We will go deeper into this in the following pages.

It should be given a prize to whoever might be able to find, even in the most advanced scientific books, the explanation to an everyday phenomenon that is the bilateral mirror symmetry, according to which the right hand is equal to the left hand reflected in a mirror. Like all superior organisms, the human body abides by this symmetry, which is very frequent due to reasons that have been ignored for a long time by the militants of current Science, especially those regarding the biological field (see the case of bivalve mollusks and all heart-shaped organisms).

The first reason lies in the anisotropy and dipolarity of the undulatory gravitational field (described in the logo). The primordial propagation in this field is spherical, so it is neither concentric, nor isotropic. This means that it is not spherically symmetrical in all spatial direction. Its geometrical rendering follows a logarithmic spiral development, which confers it a precise dipolarity: waves, expanding in spheres, eccentrically revolve around a polar axis, whose extremes, which are conventionally called “North Pole” and “South Pole”- respectively see the rotation progressing in an anticlockwise and clockwise direction. So, the propagation of our logo, visually rotating in a clockwise direction, has its axis of rotation perpendicular to the screen in the center-of-mass, with the South Pole outside of the screen and towards us, and the North Pole under the screen.

Moreover, the bodies attracted into the field (like the insect, the particle, the stars, the clouds and the calcareous molecules in the previous chapter), enter it with a centripetal movement which is contrary to the centrifugal development of propagation. This means that the movement of matter in the field has got a polarity that is contrary to propagation: the spiral band on the logo, marking the anticlockwise centripetal movement of the insect, the electron etc… in the field, has its North Pole outside of the screen and towards us, and its South Pole under the screen.

Now let’s draw up (on the same plane of the logo) the graphic rendering of an identical propagation whose poles have an inverted order. This means that the axis of propagation is ant-parallel to the axis of the logo, being both of them perpendicular to the screen in their respective centers-of-mass(Pict.2). We will obtain a clear bilateral-mirror-symmetry structure, recalling the image of a bivalve mollusk, of a heart, of a heart-shaped leave, the face of a barn owl, the position of two identical twins in their mother’s womb or the symmetrical position of cerebral hemispheres. 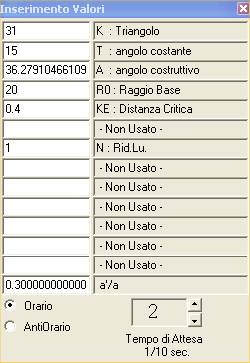 But the most interesting thing is that the double, eccentric propagation shows a never mentioned, although geometrically evident, faculty: it permits its waves progress in couples and flow together in one wave, which is spherically coincident with both of them. This is just the wave that, in picture 2, is marked by the overlapping of the original two in the moment in which the two spiral bands converge (not the external ones, about which we will talk later). Such a faculty can’t be due to concentric types of propagation, which can just bring their respective waves to intersect, but not to spherically merge in the space.

From what we call undulatory conjugation (lat. Coniugium = union) between two sources having the same gravitational intensity springs, as you can see in the picture, a concentric daughter propagation, from which derive  all circular natural structures ( spherical and cylindrical shapes).

The expressions “conjugation” and “daughter propagation” do not have a symbolic value, but they both state in concrete terms that the genesis of life itself already lies in the faculty of two photonic propagations (that is already present in elementary corpuscles) to compose and “conjugate”.

Downright biology will be the final, evolutionary result of the above described elementary faculty provided the presence particular conditions, like those distinguishing the Earth from all the other planets of the Solar System.

All the structures of the universe bring us back to the ones we have described until now:

To this classification also belong the crystals, having an apparently unfitting structure. If we look at a crystal through a microscope or a diffractographic analysis we can undoubtedly say that it identifies with one of the two categories. Current Science considers the above mentioned morphological phenomena mere similarities or exterior features to describe without finding the genetic thread that links them.

In the following pages we will describe in detail the origin of particular forms of symmetry, like the five-rayed symmetry (or star symmetry), which is extremely common in nature. The morphogenesis finds in the cosmological equation an absolutely universal explanation.

Working on pict.1, we will understand another fundamental natural phenomenon, which has been profusely discussed but never really explained by contemporary Physicists, as they recognize in the article: “The Chirality of the Universe” by Hegstrom e Kondepudi, published on the Journal LE SCIENZE, no. 259, March 1990. Chirality, from the Greek word cheir (=hand), occurs when a body (the hand in this case) is eterorotatory, this means that its movement can be both dextrorotatory and levorotatory: each movement is the mirror image of the other. This phenomenon is also called enantiomorphism, from the Greek word enantìos (contrary) and morfè (shape).

Whoever reads the above mentioned article immediately becomes aware of two facts:

We must not mistake the just mentioned enantiomorphism for anisotropy even if the former is direct consequence of the latter. The field drawn on the logo has proved to be anisotropic or not symmetrical in reference to all spatial directions. Its dextrorotatory (clockwise) or levorotatory (anticlockwise) movement shows a difference that is only visual, it just lies in the different perspective adopted with respect to the axis of rotation poles. To obtain a mirror opposition, it is needed a translation movement of the centre-of-mass of the field towards the visual North or South, so that the waves can spread on multiple planes following the direction of the translation directix.  In this case, the clockwise/anticlockwise movement will not be just a perspective fact; it will be structurally irreducible to its contrary.

We can suggest a pragmatic example to identify the causes of our study: the Nautilus shell, on the same plane, does not allow chirality: although remaining anisotropic, it is a not-chiral entity; another example can be the snail. Undergoing a southbound translation, it is chiral and dextrorotatory, as the vast majority of univalve snails are.

The difference between the two natural aspects of a translation towards the North or South of a field (respectively the South and North of the attractive movement of matter), will be better explained in other sections of our work. Anyway, any further detail on the topic could not be understood without the necessary premises regarding the geometrical and mathematical structures of the “aggregating” field, which is our gravitational field.

In pict.s 3 and 4 the enantiomorphism of the horns of a same animal is highlighted inserting in pict.1 (reducing all proportions) the effects of the translation of the centre-of-mass of the field from the right side to the left side of the screen: in pict.3 towards the North (left horn) and in pict.4 towards the South (right horn) of the two propagation waves. The axis of rotation of the field, in picture 1, which was perpendicular to the screen, in the centre-of-mass of that field, is now the horizontal axis around which revolve the waves lying on such equatorial planes that are perpendicular to the screen and parallel among them and that go from right to left. 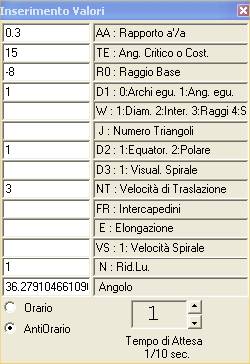 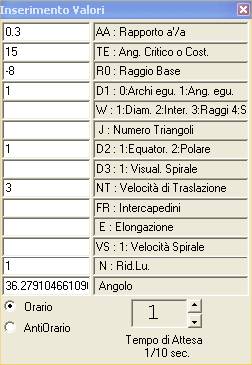 Permanent link to this article: http://renatopalmieri.com/?page_id=811